Posted by CHRSC Webmaster on October 1, 2012 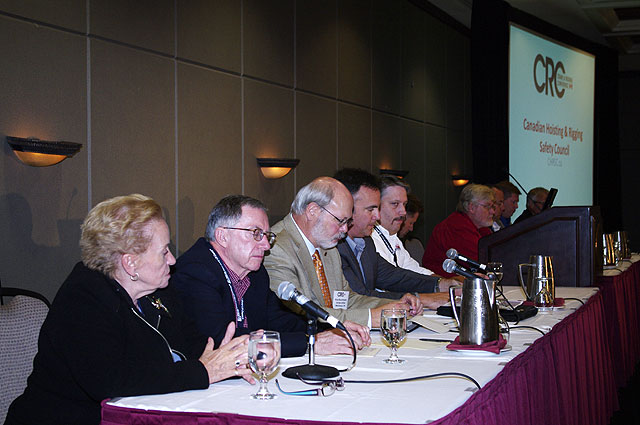 The second Crane & Rigging Conference (CRC) Canada featured the public inauguration of the Canadian Hoisting & Rigging Safety Council (CHRSC). The independent group also formed a panel to conclude the two-day event at the Sutton Place Hotel in Edmonton, Alberta, 13-14 September, sharing with delegates a commitment to ensure positive change and better harmonize the way cranes, hoists and rigging equipment are used in the region.

CHRSC acting chairperson Fraser Cocks, executive director, British Columbia Association for Crane Safety, said: “The intent of the council is to ensure that the members consist of applicable major stakeholders across Canada.”

The event again provided opportunities to improve the management of crane operations before, during, and after the lift. Fleet and facilities managers, safety leaders, operators and riggers, participated in sessions to help users apply new regulations; evaluate and safely prepare the work environment; hone inspection skills; manage and maintain equipment; and learn from colleagues and competitors.

The conference focused on construction, mobile cranes, overhead cranes, hoists and rigging. Organizer MCM Events is expected to confirm dates for CRC Canada 2013 in the coming weeks. The CHRSC will again address attendees and report on the progress it has made over the past 12 months.

A full roundup of this year’s event will appear in the November issue.